So they get hold of a cannon, and the smallest one dons a bike helmet and gets inside the cannon. They light the fuse, and then fire her from the cannon.  As they watch her disappearing, one of them turns to the other and says:  I hope she makes it to the store.

Anyway, I’m just about to send Phoebe my last set of summer samples.  I hope they make it to her this time; that they don’t fall into the black hole of Chullora post office sorting facility.  I don’t think that Chullora has fully recovered from closing down the big Metro twin drive-in.

Spring will be a little late this year …

I remember watching an old black and white starring Deanna Durbin (I was a big Deanna Durbin fan when I was young).  It was called: Christmas Holiday, and she sang: Spring will be a little late this year.  It was one of the few movies she made as an adult.

Anyway, I’m beginning to wonder what Australia Post has against me.  It seems that now, after the fuss of not delivering parcels to me (Another brick in the wall for Gregory St.) they’ve lost the samples of my entire summer collection that I sent to Phoebe about a month ago for her to do a photoshoot.

Now I’m waiting to see if they can find them, and if they can’t, to send her another batch. Surely they can’t possibly lose another parcel, can they?

So, Spring will be a little late this year.

I know it’s a grotesquely vile title, but I couldn’t resist.  About half the restaurants and cafés we visited in Bali last week were playing Bob Marley.  Somehow it was Bob Marley week.

So, all went well:  the summer collection is in production, due to arrive here in a few weeks, and the winter collection for next year is underway.

Ms Juju has the clothes under control, and Mr Usman has made me a beautiful black nubuck belt to go with the Drunken Sailor pants.

It’s always a pleasure to visit the tiny factories where the work happens, to know the workers are treated well and that they are eager to do a good job.

Anyway, my feet is my only carriage, so I’ve got to push on through.

Things like diagonal seams, asymmetrical hems, pockets, drapes, sideways pleats and v-necklines are all those little things that distract the eye; (like the logic+proportion “Little Blue dress” that Phoebe is wearing) and  direct it away from where we don’t want it to go.

So – strategic distraction.  One of those girls’ best friend things.

Though diamonds could work; the pink ones are quite pretty.

On Sunday we’re going to Bali, but I’m using wordpress scheduling to get this to appear on Wednesday when we will already be over there.

We’re going to finalize production on the spring/summer collection for this year, and get started on doing the samples for winter next year.  This will include making the Drunken Sailor pants (Drunken Sailor pants, or Jodhpurs?) that most of you voted for, and a belt  (How to do an insanely ridiculous belt (part 2)) that goes with them.  It will be quite exciting to see the concepts turn into reality.

I know you will be waiting with baited breath, just as I will be.

So anyway, I will be in Bali having a tumultuously dreadful bad horrible time, as you can imagine. 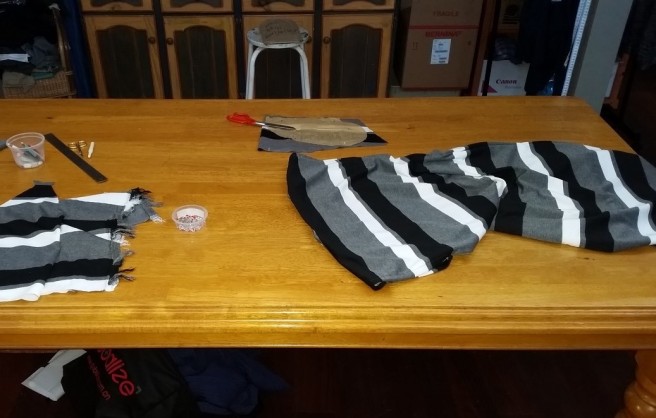 Aching for a frock.  Again.

I saw this really great striped Ponte fabric when I was at Crossways Wool and Fabric store in Subiaco, so now I’m aching to design another frock. (See Aching for a Frock)

WordPress has this majestically cool graph (is it a bar graph where you have columns? A column graph?) that shows you where your viewers come from. (I know, Mr Churchill, that a preposition is something you should never end a sentence with, but that was before technology.)

Anyway, it appears that I have viewers from Antarctica, Norway, Sweden, Denmark, Japan, Singapore, India, Thailand, the Philippines, the Netherlands, Lithuania, Russia, Germany, Japan, Columbia, Indonesia, Canada, Vietnam, Italy, the UK, France, the US, and New Zealand, to name but a few.

And that doesn’t even count Grant, Phoebe or Doug (Phoebe’s boyfriend).

Sherlock Holmes and the bee sting

Last week we went to Perth.

We stayed in Subiaco, and on Monday morning I was walking around Leederville when I got stung  by a bee.  I’ve been stung by a bee before, so didn’t worry too much: I was pretty sure I wouldn’t go into anaphylactic shock, or anything.

On Tuesday it was alright, but on Wednesday my arm turned into a red balloon (one of those long thin ones that clever people make into sausage dogs).  It wasn’t all that sore, but it was extra desperately itchy.

On Thursday I caught the bus back to Geraldton, as Grant had to fly to Melbourne.

The bus driver put on a Sherlock Holmes movie, and in the movie a boy gets stung by a bee (how weird is that?) and Sherlock says:  The difference between a bee sting and a wasp sting, is that a bee leaves his stinger in situ. (he may not have actually said “in situ”, I’m paraphrasing here)

So it has to be absolutely unassailably true if Sherlock Holmes said it.

I figured you wouldn’t want a picture of my bee stung arm, so I’ve given you a much nicer image,  where Phoebe could  potentially have got stung by a bee .

Oh, and my arm is nearly better, thanks.

Sunglasses are the best form of eye make-up.

If I was any good at photoshopping, I would flatten that bit of wayward hair.

I was asked to do a rubbing of the brass grave marker plaque of Monsignor Hawes in the Utakarra cemetery chapel, by the Cathedral Precinct project.  Monsignor Hawes had this made for himself in about 1936 because he thought he was going to spend his retirement in Geraldton, and be buried here.

He ended up going back to the Bahamas in 1939, and was buried there.

My image isn’t going to be used, as they have decided to exhibit an old one that was already hanging in the Cathedral.

It was an interesting exercise, nonetheless.

The rubbing will be on display in the new Cathedral Precinct when it opens in September.